A Member of Bowls England

In the morning they played Wiltshire in a hard fought semi final, with the, lead changing several times. The decisive moment came on the 19th end, with Gloucestershire 5 shots up, the rink of Finley Williamson Alex White Jack Williams & Ben Coldrick, lay 6 shots with Both skips having 1 bowl left each to play, Wiltshire’s skip drew a close 2nd, after much deliberation with his team, up stepped Ben Coldrick, with a running bowl removed the Wilts Bowl to pick up 6 shots.  Both Gloucestershire rinks had narrow victories, winning 39-35.

This victory was even more impressive as 14 year old Finlay Williamson was called in that morning as a late replacement, making his U25 debut.

The final saw Gloucestershire get off to a flying start, leading by 10 shots after 5 ends, only to see a spirited fight back by Somerset to draw level at 11 ends. the lead changed several times over the second half of the match. With just 3 ends to play, the match was still tied, the final end from Ben Coldrick’s rink saw them pick up 2 shots.

It was now down to the other Gloucestershire rink of Jack Grover Adam Smith Joe Hibbard & Josh Phillips to secure victory. On the penultimate end with the last bowl in his hand, Gloucestershire skip Josh Phillips was 2 shots down, with temperatures reaching 30 degrees on a hot & steamy day, Josh had ice running through his veins, he drew the perfect shot moving the jack a few inches to pick up 3 shots. 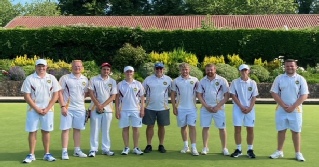